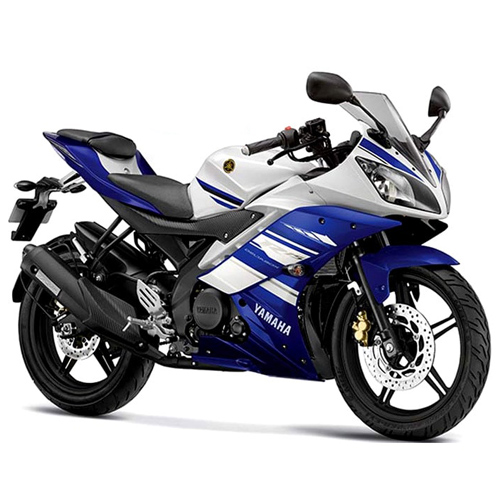 Yamaha R15 v2 is a sports bike having the 149.2 cc engine and it is a very powerful engine. This bike will provide the best services and all the customers review it very positively. The Yamaha bikes are available in the showroom in the distinct colors. Both the external and internal feature of this bike is very much attractive and aggressive. The weight of this bike is 139 kg and it is very light in weight to ride on it. The price of this bike is very favorable to afford it very easily. The braking system of this bike is quite similar to the other bike in the market.

Yamaha brand manufacturers all bikes from japan. The Yamaha motorcycle has its pride because these bikes have been giving their best services from its origin. Recently they have offered a new bike named Yamaha R15 v2. This bike possesses all the new trendy features. Sometimes the bike is imported from Japan or oftentimes the parts of this bike have been imported from Japan. The Japanese bike named Yamaha R15 v2 is giving its best performance to all the bike riders.

This bike possesses a stylish fuel tank and this fuel tank is capable of getting 14 liters fuel. There is a Yamaha brand logo spotted on the fuel tank. The blue color line on the fuel tank makes the bike unique. This fuel tank will allow you to make a short or long trip. The bike has the fuel injection system with a better fuel utilization rate. The fuel tank shape of this bike does match its body framework.

The bike has LED light with a great headlamp. The bike possesses the MF type battery and the battery voltage of this bike is 12 V. This bike has not any low fuel indicator system. And all the energy of this bike comes from this battery and this battery is rechargeable. This electrical condition suits this bike very well. The side signal lights newly arrive and those lights will allow you to obey the rules of the traffic in the busy roads or cities.

The tyres of this bike is very attractive and the wheels of this bike made of alloy. The tyres are configured with some notch and spikes that allow you to enough friction to avoid the uncertain incidence. Both brakes of this bike are disc type. As for it, this bike will conserve the engine energy even in the undulated roads. The authority doesn’t publish the extra news about the braking system of this bike.

The bike is so light to ride on it. The handlebar of this bike is also so light in weight and that makes the journey full of safety. The seat has been designed with a split-belt. That allows the pillion to enjoy riding in the long run. The rear seating position is upper-right than the rider seat. The new tyres of this bike will help you to continue the bike riding with full of fantasy. The suspension of this bike is also very much comfortable and enjoyable that allows your journey hassle-free and full of fun.

The latest bikes always create new surprises for all bike lovers. In the same way, this Yamaha R15 v2 bike also brings the new trendy attachment to the Yamaha motorcycle company. This bike possesses some new features that will give you the best quality riding experience with a low fuel consumption rate. The price of this bike is also much favorable. Easily you can by this bike according to your personal color choice. The bike is available in three colors in the market. Don’t be late just buy one of them and get the aggressive bike to enjoy your travel time with the two wheelers.